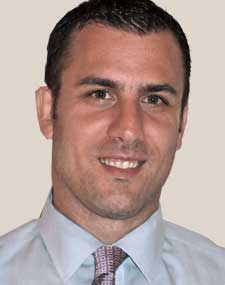 Board Qualification, American Board of Foot and Ankle Surgery

Dr. Gambardella, a Connecticut native, graduated from Columbia University in 2003 where he was a Division I pitcher, and spent time in the Dominican Republic playing baseball following graduation. He went on to complete his pre-medical requirements at Harvard University and ultimately earned his Doctor of Podiatric Medicine degree from Temple University School of Podiatric Medicine in 2010. While there, he served as President of his class and was inducted into the distinguished Pi Delta National Podiatric Honor Society and the Stirling-Harford DiPrimio Honorary Anatomical Society. He was also the recipient of the Kate L. Paine Scholarship in Peripheral Vascular Disease, among other numerous awards and scholarships. While at Temple University, he also earned membership into Who’s Who Among American Colleges and Universities. He then completed a comprehensive 3-year surgical residency at Yale-New Haven Hospital where he received extensive training in reconstructive foot and ankle surgery and deformity correction, diabetic limb salvage, and trauma surgery of the foot and ankle. During his residency, he authored a number of publications and received the prestigious Residency Excellence Award.

Click here to find out about our revolutionary Toenail Laser Treatment.